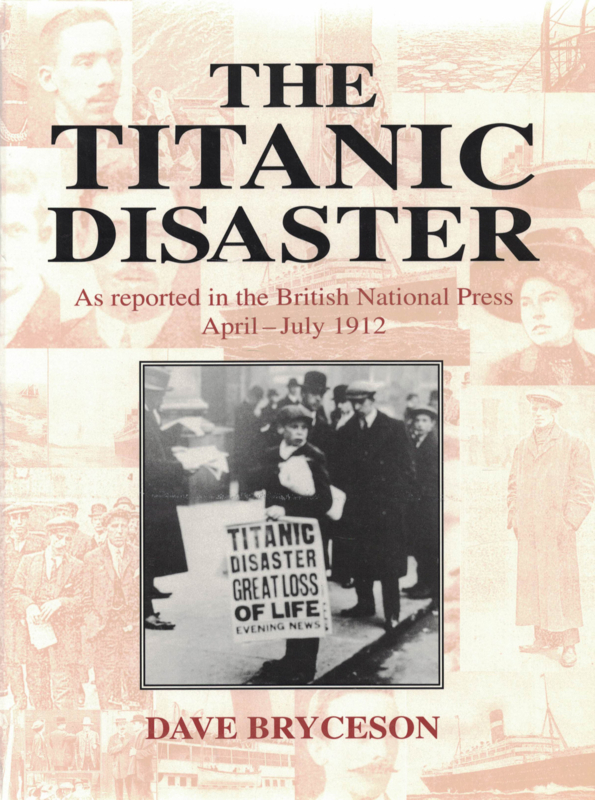 When the Titanic sank on 15 April 1912 in the icy North Atlantic, the tragedy gripped newspaper headlines worldwide. This most luxurious passenger liner - on her maiden voyage from Southampton to New York - was carrying a poignant cross section of  society, from the rich and famous to poor emigrants searching for a better life. The public was agog.

The Titanic Disaster, based on a major collection of contemporary newspaper cuttings, gives a rare insight into the tragedy in which more than 1,500 passengers and crew died, from the moment when the news first broke right through to the findings of both the American and British Inquiries several months later. The reports, primarily from Britain's Daily Sketch and The Times, have an immediacy, pathos, and wealth of human interest that still fascinate more than 80 years later.

At first it was thought that the Titanic, earlier described as 'virtually unsinkable,' could limp to port, or that there were other liners standing by to pick up the 2,358 people on board. Then the terrible truth began to emerge. Among the harrowing accounts from survivors were tributes to the British crew, 'every man of them was a hero,' and to the calm of the second-class and steerage passengers. There was, however, an account, never corroborated, of a 'wild scramble among the first-class passengers,' some of whom even tried bribery to save themselves.

Newspapers, trawling for links with the tragedy, wrote about psychic warnings, the Marconi company whose wireless apparatus was used to send out the SOS calls, and six firemen alive thanks to unpunctuality - they were dismissed for arriving on board a few minutes late.

A school-mate recalls 'Teddy Smith,' the distinguished Titanic captain who went down with his ship, as 'a brave soul as a boy, always ready to help'. There is an official denial that the Titanic crew's wages had been stopped from the moment the ship foundered, as claimed initially. Many column inches were given over to searching questions about responsibility, emotional offers of adoption, and fundraising efforts by people from all walks of life, desperate to help. And so the coverage continues, in moving, absorbing detail.

Dave Bryceson lives in Kent. He is a member of the British Titanic Society, the Titanic Historical Society, and Titanic International, and is a leading supplier of videos, books and memorabilia to Titanic enthusiasts worldwide.