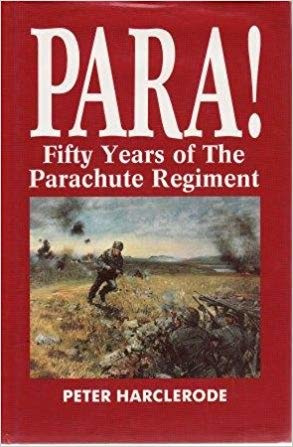 This authorized history, written by a former officer in the Parachute Regiment, covers the formation, training and deployment of the British airborne arm from its inception in 1942 to the present. Initially comprised of volunteers from all British Army units, the Parachute Regiment saw its first action in 1942 during a raid against a German radar station in occupied France. During the remaining years of WW II, it saw service in North Africa and Italy, was given the task of holding the left flank of the Normandy beachhead in June '44 and firmly established itself as an elite force during Operation Market Garden in Holland that same year. Harclerode chronicles the Regiment's post-WW II assignments in trouble spots such as Suez, Palestine, Cyprus, Malaya, Northern Ireland, Aden and the Falklands campaign of 1982. Legendary patrols and individual Victoria Cross-winning exploits are detailed in a fact-heavy, pedestrian narrative. The emphasis throughout is on the Parachute Regiment's versatility (the unit motto, Utrinque Paratus , means "Ready for Anything'').